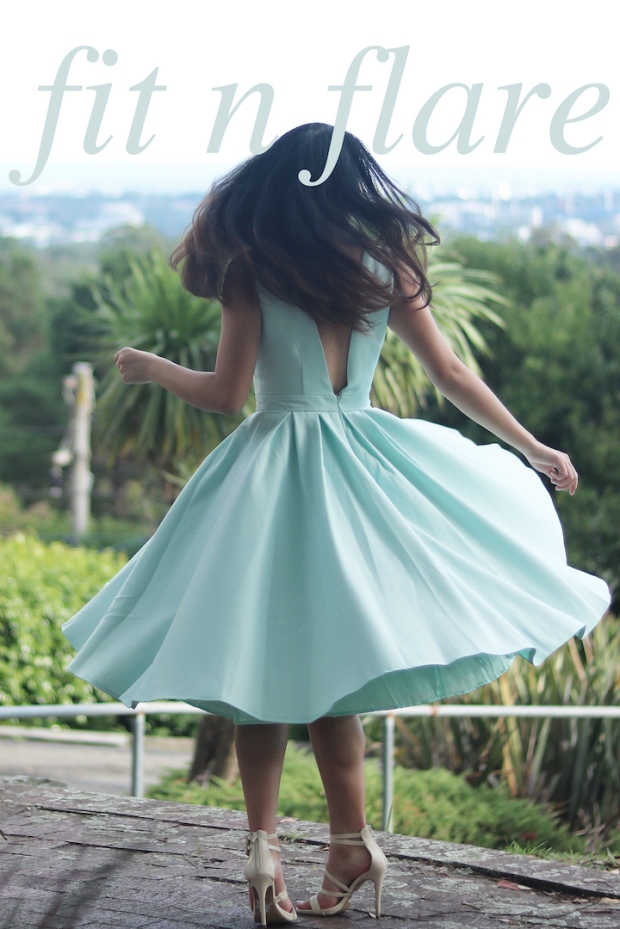 If you are looking for a deliciously fluffy, full skirted dress, stop by Chi Chi London for the prettiest, flounciest ones. It’s a pastel and floral frock shock but regardless of your day to day style, tell me you don’t want to have a good twirl and bounce in something so fun. I paired my lovely mint dress with some strappy heels but if you were going to a themed fifties party or garden day, some little sneakers would be just brill too!

If you’re interested in this dress, its made of a lovely thick material but something that you will definitely need to have steamed so it floats nicely. I would also recommend looking in the petite section if you were after a dress that isn’t so long. Available on their own site with free worldwide delivery and also Asos! 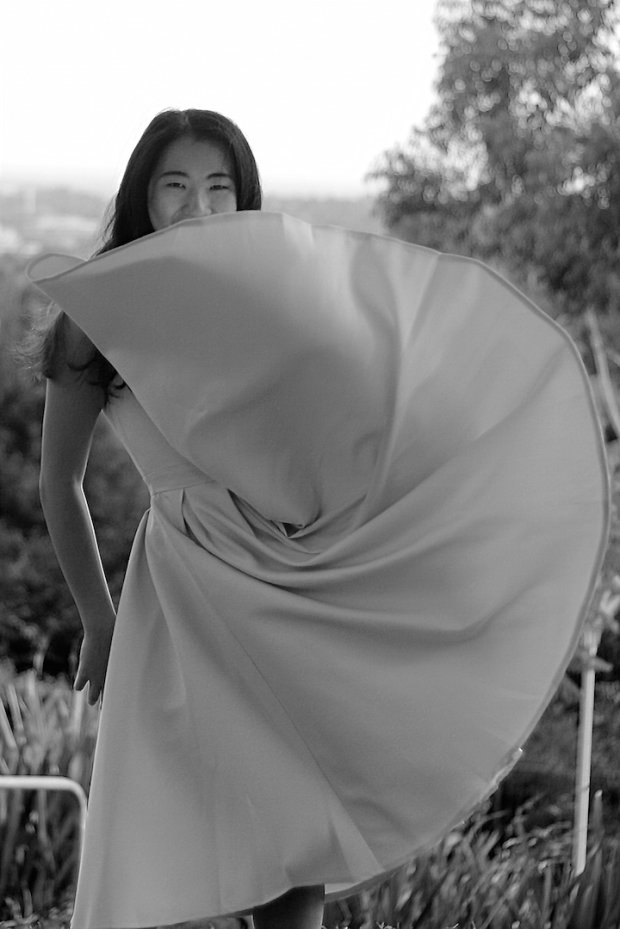 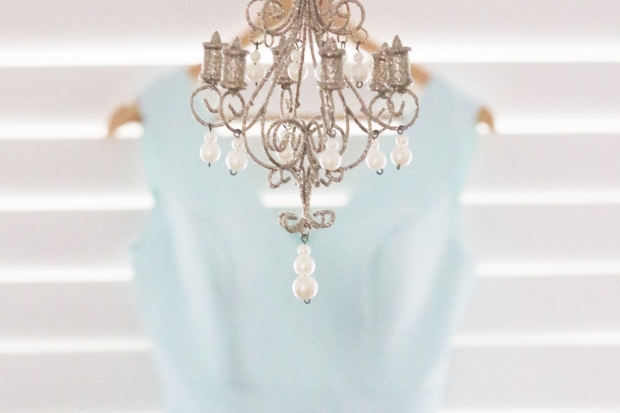 I remember buying this dress for my first job interview and thinking that it was unlikely I would ever wear it again. Oh, how wrong I was! I’ve worn this countlessly – as a dress, a skirt, dressed up, down and as a top as featured in today’s post. See how I also styled this dress for a rainy day here. This piece is short and has quite a low back which would be a bit too much skin in an office environment so layering an a-line skirt and topping it off with an autumnal blanket scarf helps overcome the issue.

I also recently got a new pair of frames from Oscar Wylee. I was a bit unsure on the shape but seeing as I don’t need them all the time, I decided to go for something different! Even after wearing them for around 2 months, I was never really convinced until these photographs. They’re really great at staying on my nose bridge and I definitely recommend!

“when autumn comes, it doesn’t ask, it just walks in, where it left you last, and you never know, when it starts until there’s fog inside the glass around your summer heart.” 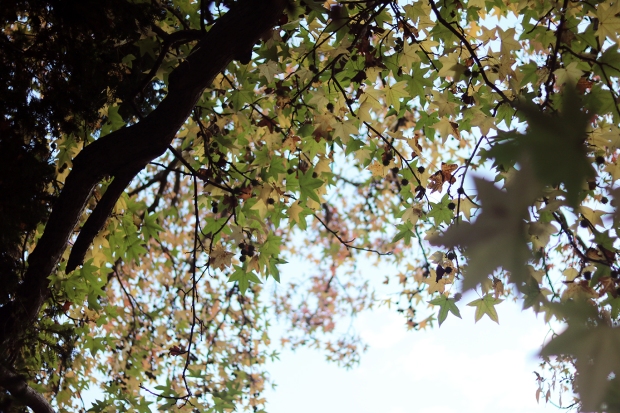 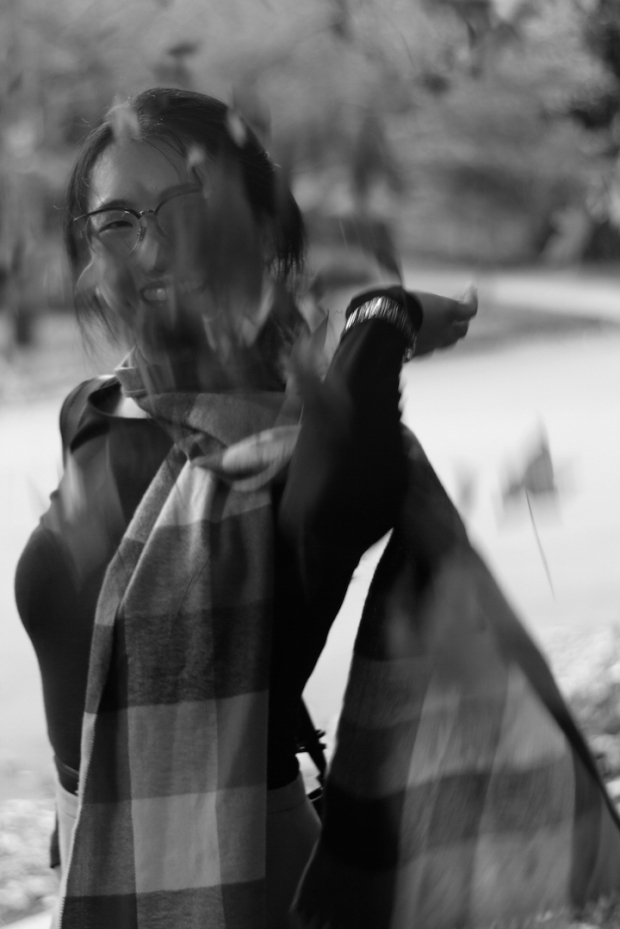 Hello hello! 3 weeks without posting :0 This is the longest absence I have had in a year and I’ve missed the excitement of scheduling a post to go live. I could tell you work got in the way or mid-semester exams took over or Sydney was having terrible weather but in actuality, I was not feeling the buzz to shoot. Then, during the ANZAC long weekend, the clouds parted, the stars aligned, I was finally digging my Insta feed and my creativity fuel was back!

Kicking things off, we have this autumn-appropriate outfit, shot in the cute little streets of Surry Hills. The hero piece is a great thick and structured double-breased blazer perfect for work and dressed down with boyfriend jeans for the weekends. So here’s to a better month ahead filled with blog posts! 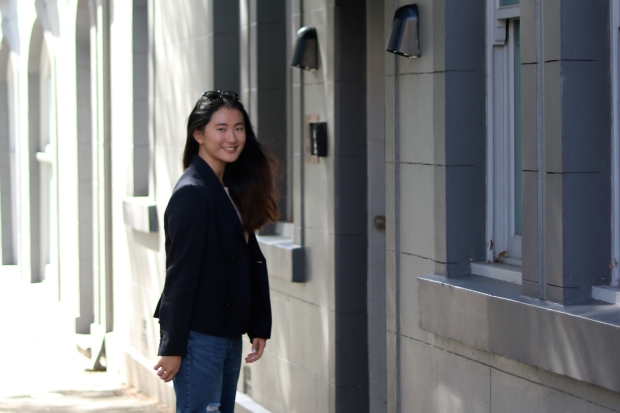 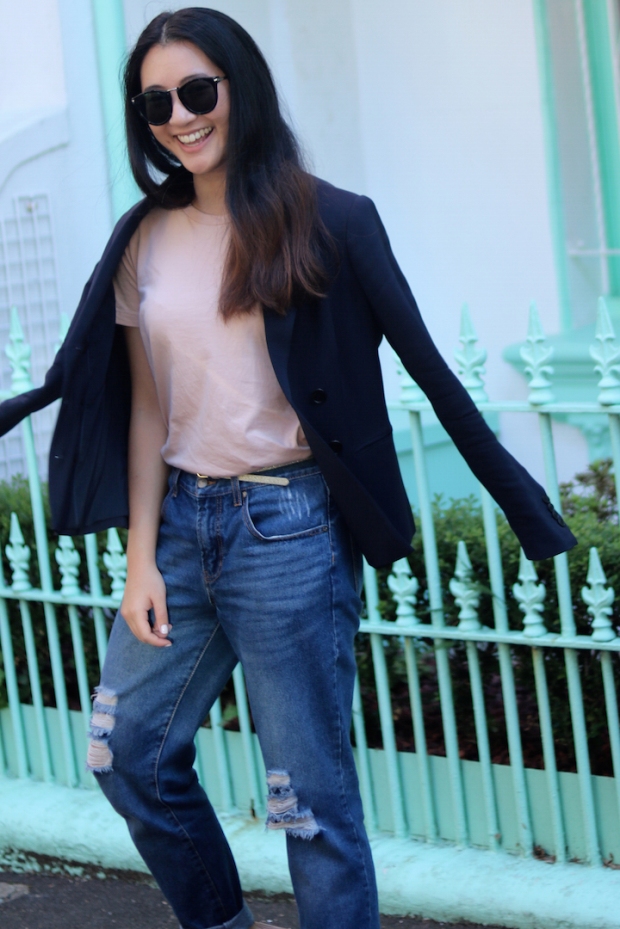 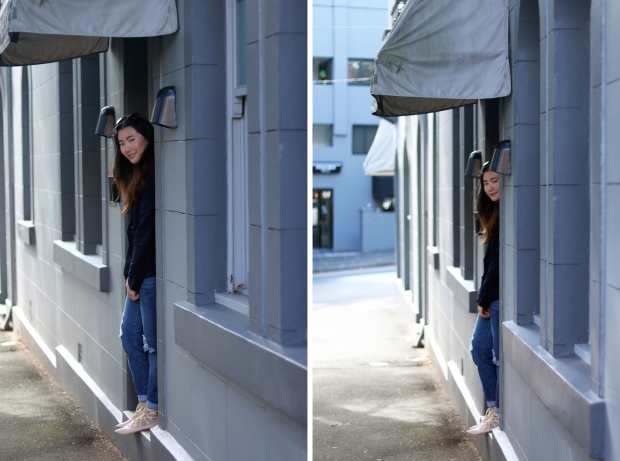 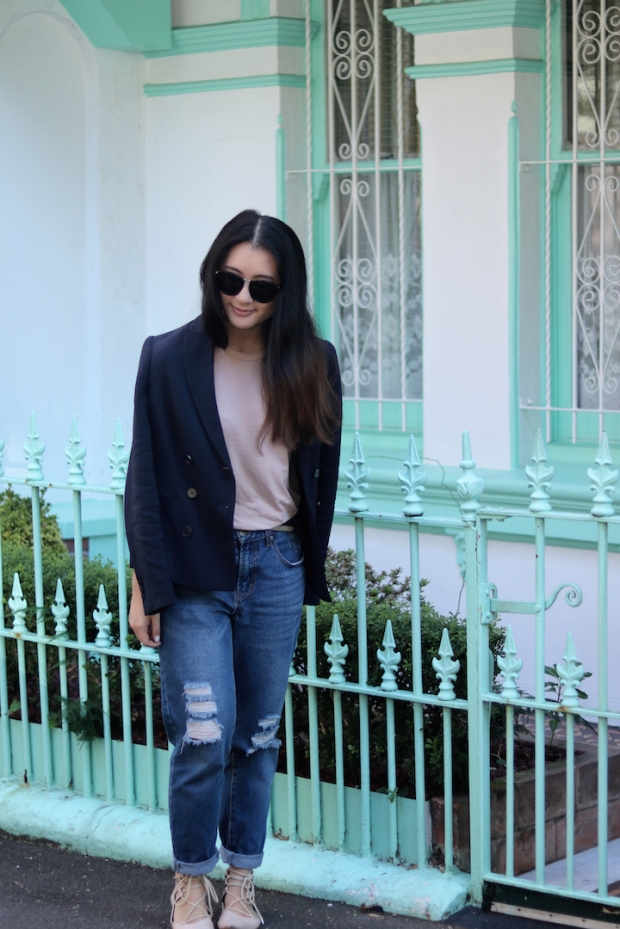 Wish I could say this was my mood right now. Instead, I am low key freaking out over mid sems, hence my absence on Instagram this past week. Just holding out for another week and then we can get a proper boogie on in something that isn’t a flimsy body con. This is my take on the iconic Ellery cone sleeves – layer a flared sleeve top under a blazer and cinch at the waist. 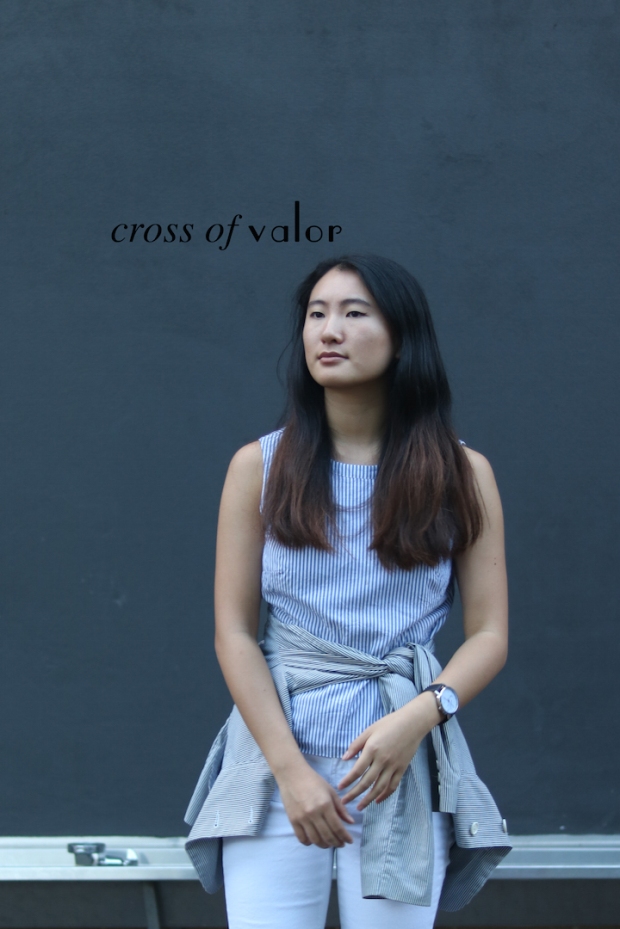 In the last one to two years, there has been a sudden influx of watch companies popping up over the internet. Over the weekend, I read this article in the Herald about how ironically timed these start ups were – coming in at around the same period as the launch of the Apple Watch. Apparently, the market isn’t as saturated as I originally thought because watch brands that haven’t even hit the one year mark are managing to make turnovers of almost a million.

Today I’d like to introduce to you a new player – Valor Watches, founded by T. Bermejo and launched only a handful of days ago. To give you some context around the title of the post, the Cross of Valour is awarded “only for acts of the most conspicuous courage in circumstances of extreme peril”. When I look at this watch, it reminds me of one of my personal mantras – I am made of courage, compassion and commitment. When jewellery can transcend its original purpose to become something invaluable for the wearer, you know its a special piece.

The marble face paired with the classic black leather band perfectly embodies what I like to refer to as ‘modern prep’. Carrying the theme into the rest of my outfit, I went with the ultimate preppy pattern after feeling incredibly inspired by the Australian Olympic team’s uniform unveil by Sportscraft earlier this week. To give it that modern twist, I layered two pinstripe pieces but kept the base crisp with white jeans. Front ties have been popular of late and knotting a complementary second piece will give you a similar silhouette.

The white denim, flowers and linen must make you think that I live in the northern hemisphere! Nope! Sydney has just brought a lot of warm weather this month but I’m hoping that the end of daylight saving will bring some colder weather along with it. 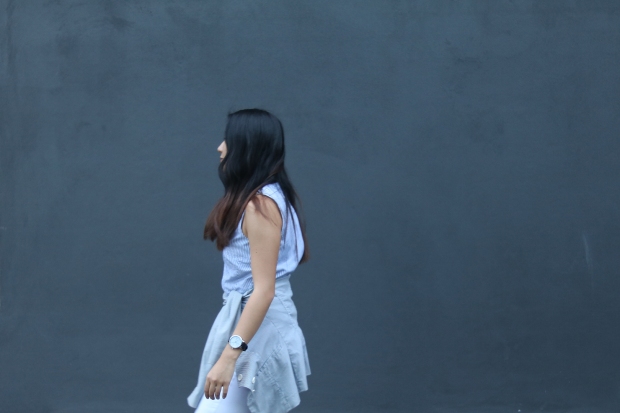 Is it weird if I tell you that this is the first denim jacket I’ve ever owned? *Collective Gasp* I think its for the same reason that I don’t have a leather jacket either. I often procrastinate buying basics because they’re usually the pieces that don’t go on sale. When ASOS offered to partner up for a back to uni post, I made sure to add a denim jacket to my cart. If you want to pick a piece that gives you lots of layering options, I would recommend a shrunken cropped jacket like this. It allows you to put on a longer item like my cardigan underneath without swamping your body. For an even more casual loungewear look with this cardigan, have a squiz at this post at the beach.

I have a Pinterest Board dedicated to layering and I’ve concluded that it really is an art form. I can’t wait for the months to continue to get colder so I can pile on the layers but you always need to have that base first layer whether it be a plain tee or in this case a classic black slip. Mine’s actually a detachable one from a sheer dress that I never wear anymore and you can see how essential it is regardless of season in this summer post.

Thank you for supporting Style Smorgasbord collaborations! ASOS is one of those big brands that I never even bothered to think about because they have a reach of a few million whilst I’m just in this tiny corner of the internet. If you haven’t already, make sure you visit Monday’s post for some more campus inspo featuring some other great ASOS buys! 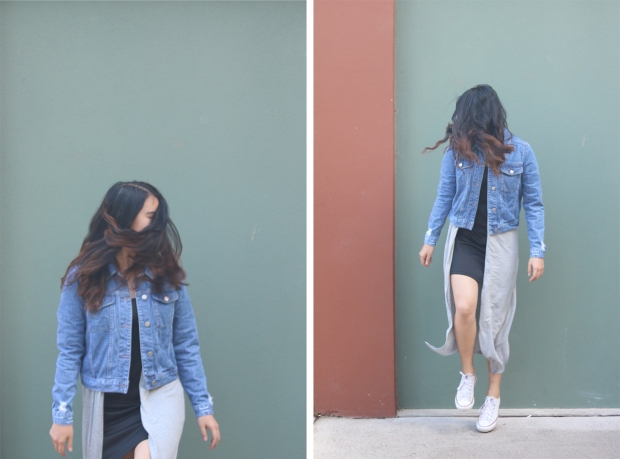 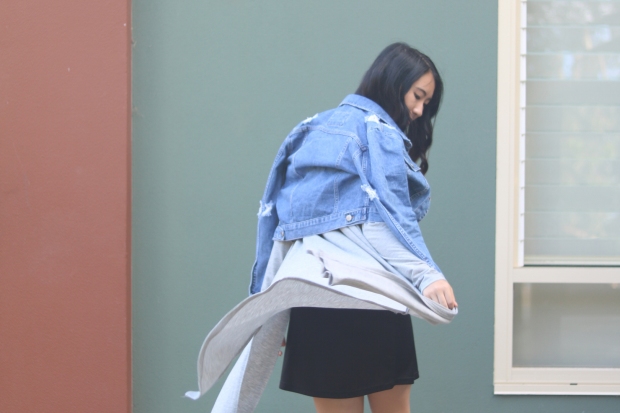 How great has this four day weekend been? A double weekend was exactly what I needed to slow things down a bit and gorge on chocolate and tea (2 new loves from Twinings – apple & ginger and spearmint & peppermint). I’ve been moseying around, trying to get up to speed with everything as well as pre-doing things because I know in a couple of weeks, it’s going to get full on. That means pre-readings, pre-shooting, pre-instagramming, pre-writing and pre-emailing. It’s a bit annoying, losing the real time authenticity of blogging and the excitement that goes into hitting ‘publish’ but if you fail to prepare, prepare to fail – as they say.

Today, ASOS asked me to share what I would wear to university nowadays compared to what I wore on my first day of uni as a fresher. You can see that cheesy enthusiastic throwback picture here. Which, brings me back to mid-semester break. I always find myself burnt out right around this time. The newness of the school year has worn off, the social calendar falls apart as everyone gets too busy and the days get shorter and colder.

Maybe all you need is a good outfit to roll out of bed into next Monday – ready to face group assignments, mid-sem exams and all day library hang outs. I’ve been wanting to try a pair of over the knee boots forever now and I finally get why people have them in multiple heel heights and colours. They are super flattering even if you have more muscular legs but I will point out that real/faux suede is difficult to maintain (I have grass all over mine already from this shoot) so I’m glad I didn’t drop 1K on a pair of SW’s. 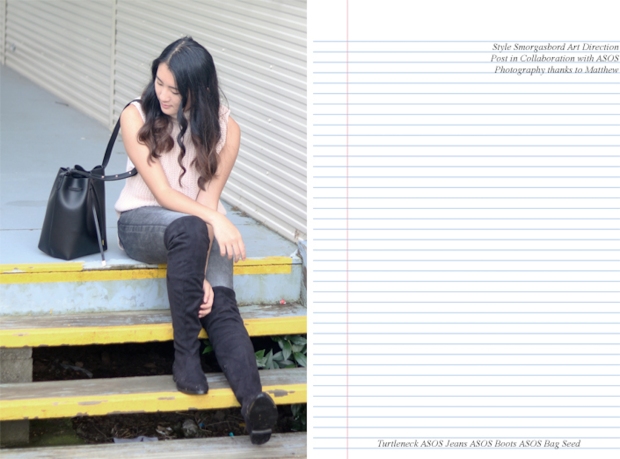 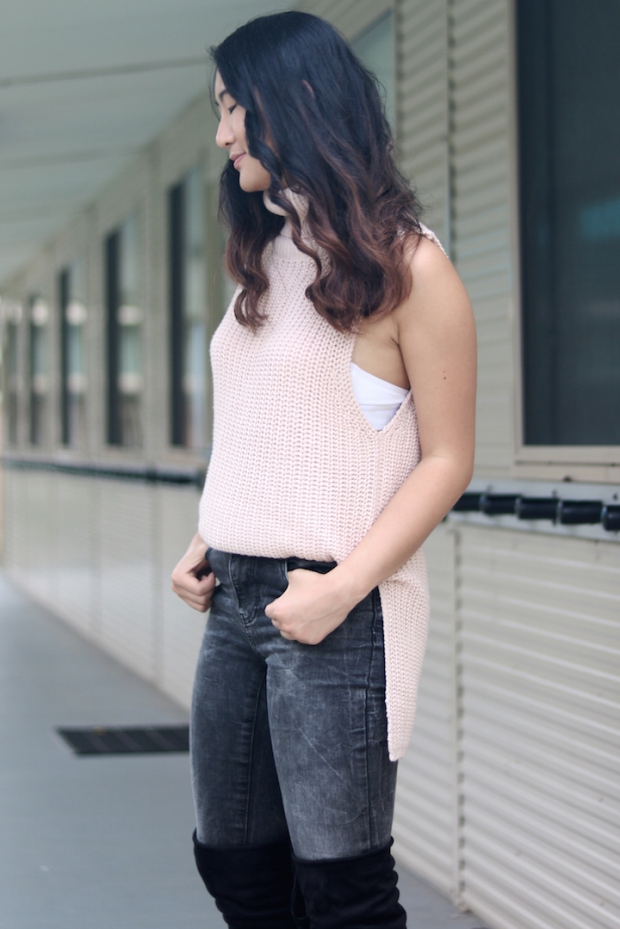 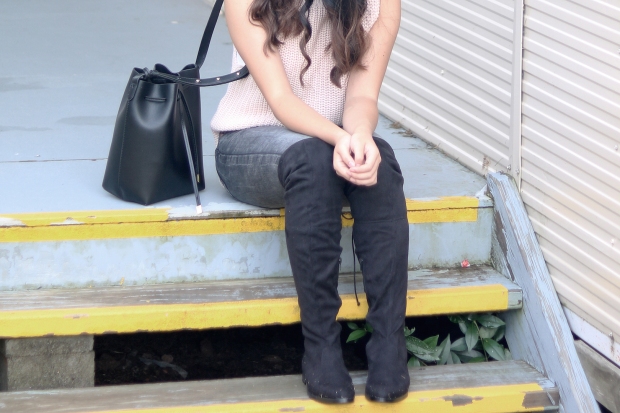 Fundamentally, there’s nothing more man child than a grown adult in a pair of overalls.

Conclusively, they are so comfortable and hide the stomach with just a silver of skin so you can put it over all your cropped tees. Transition it for the colder months with a chunky sweater and make it exam time appropriate with a collegiate jersey lazily thrown on top.

Basically, they’re my new go to denim and these patched ones from Cotton On’s 91 denim range are exactly what I was looking for at $10! Same price as a pressed juice people. Loose, bronzed, brushed buttons and pockets for days.

Overall, go get yourself a pair of overalls.

Thanks for putting up with all my synonyms and I hope you have a lovely easter long weekend (if you’re lucky enough to get one!). 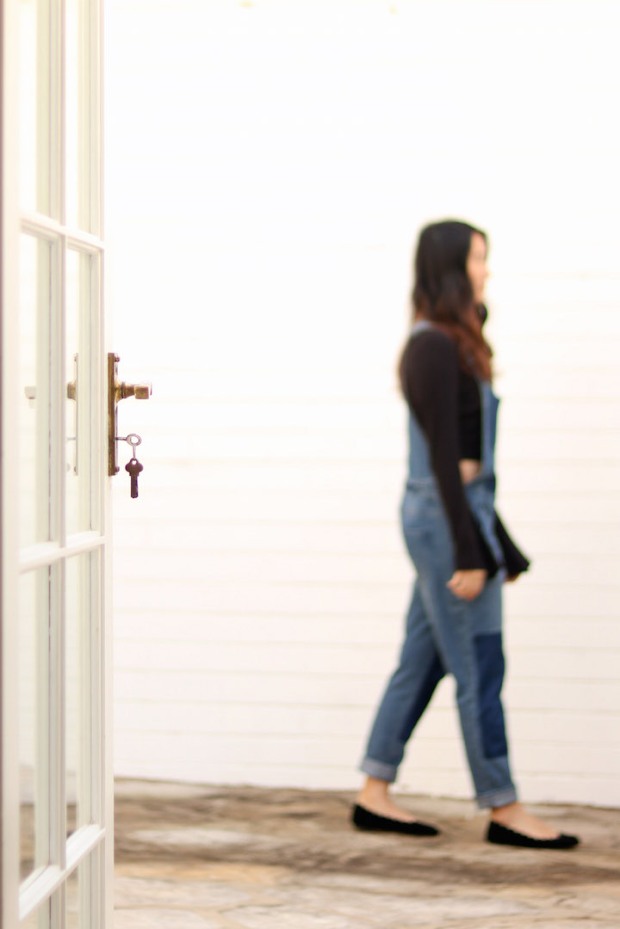 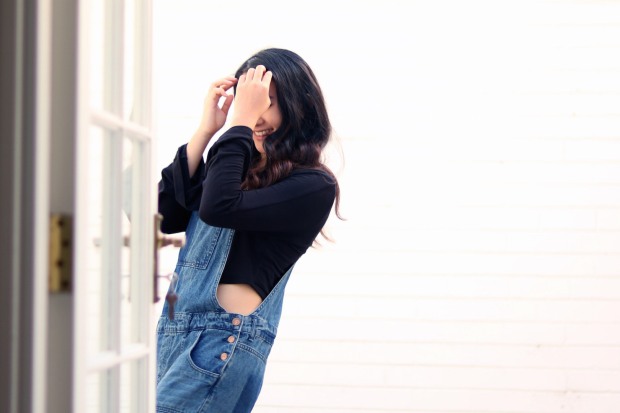 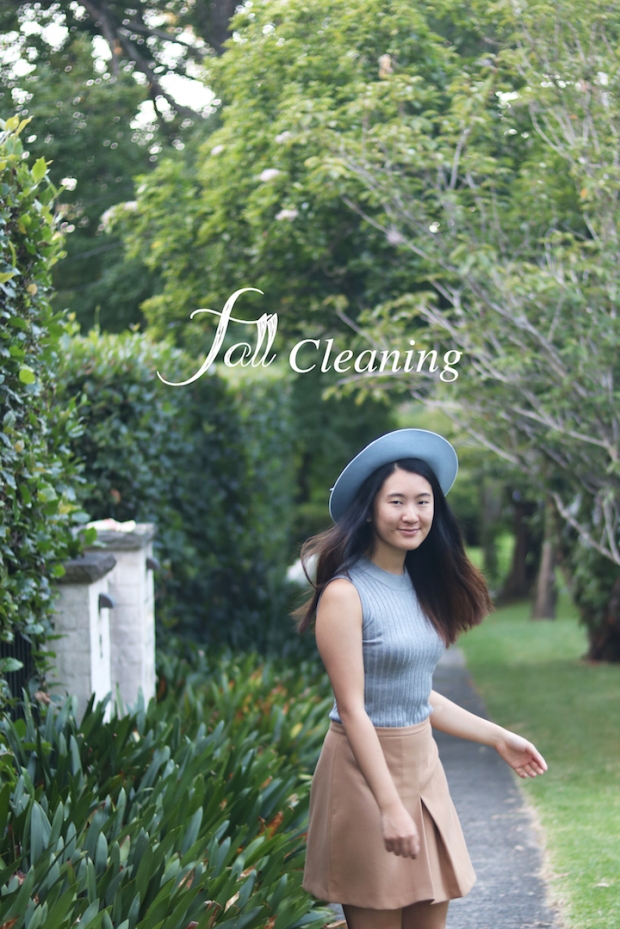 As much as I love prints and patterns, I also like how solid colours look together and since March officially kicks off autumn weather, I wanted to show you my four favourite colours to wear transeasonally: blue, camel, grey and white. 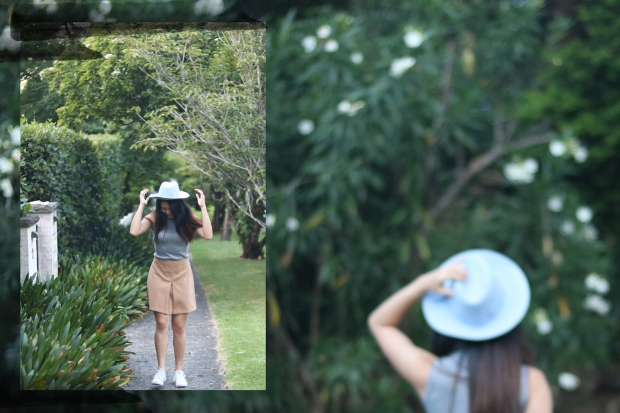 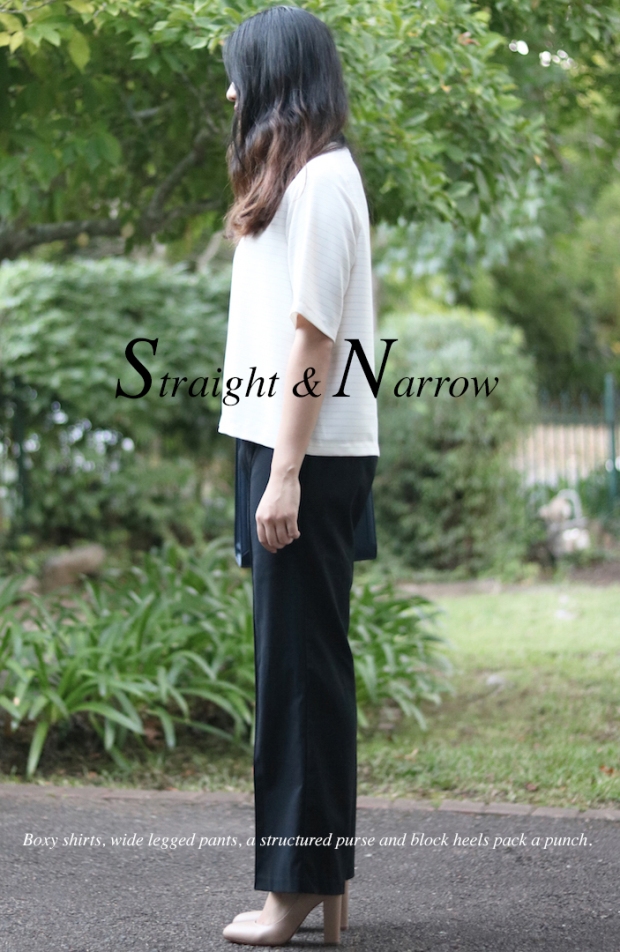 As you all know by now, Style Smorgasbord is a paradoxical blend of high and low, girly and masculine, tight and loose. Today, I decided to shake up the common denominator and went with boxy, structured everything.

Its the monochromatic equivalent of silhouettes.

When I build a look in my head, there’s always the hero piece that magnetises everything else together. This look centred around my new work bag from Paul’s Boutique SS16 collection. I worked with Paul’s Boutique last season so I was delighted to see their line sheet for the new season. There are so many beautiful pieces in seasonal neons but my personal favourites are those in tonal shades of stone, off white, navy and black. They are slowly releasing their lines and the ‘Perrie’ is from the Trinity Collection which is available in navy, blush and silver. The ‘Perrie’ is almost the perfect bag but I wish it could fit my 13 inch macbook air – it just falls short by about 2 cm 😦 ! I also love the classic silhouettes of the ‘Amber‘ and ‘Hunter‘. 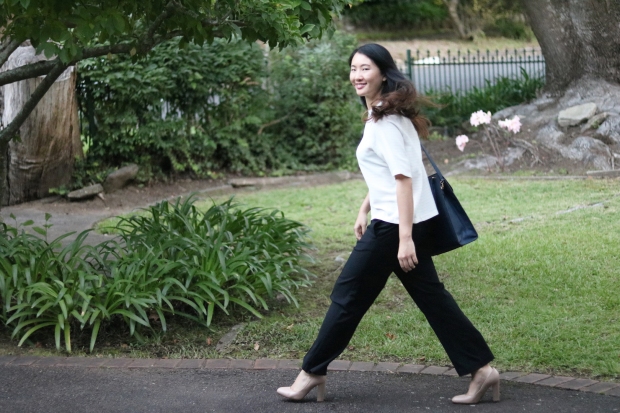 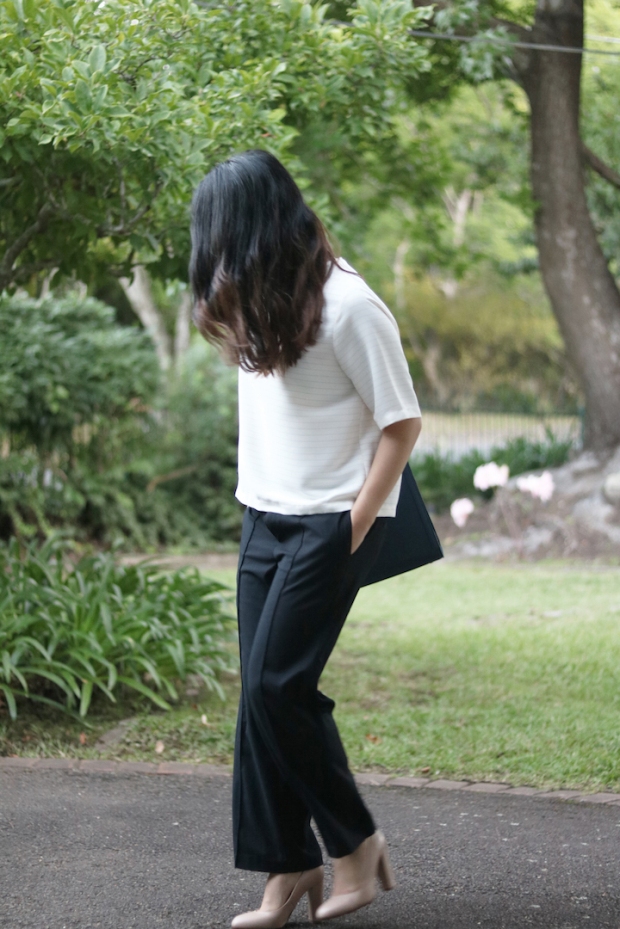 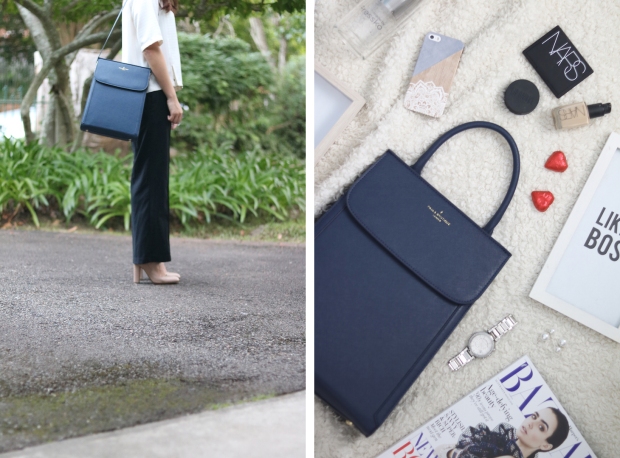 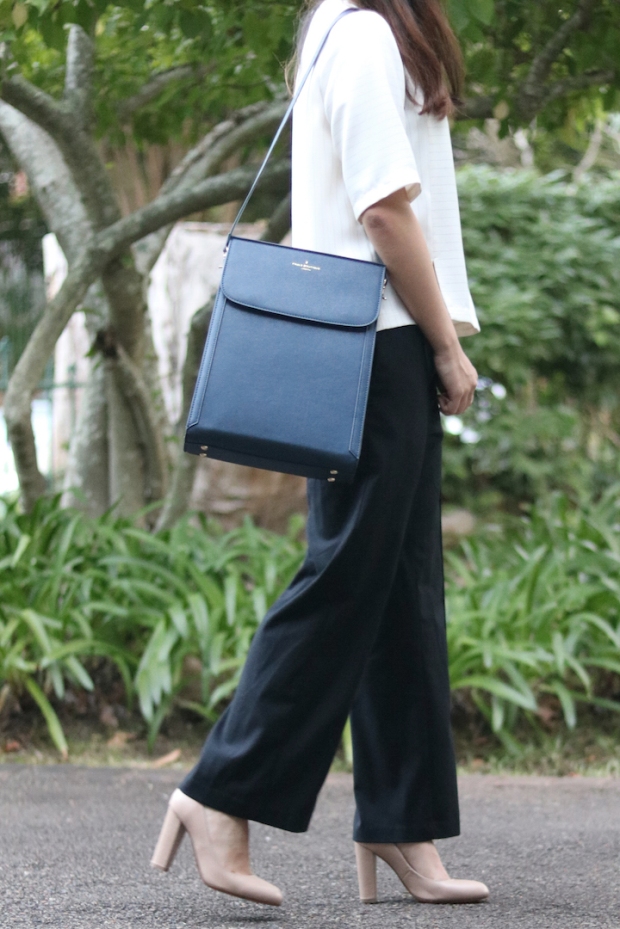 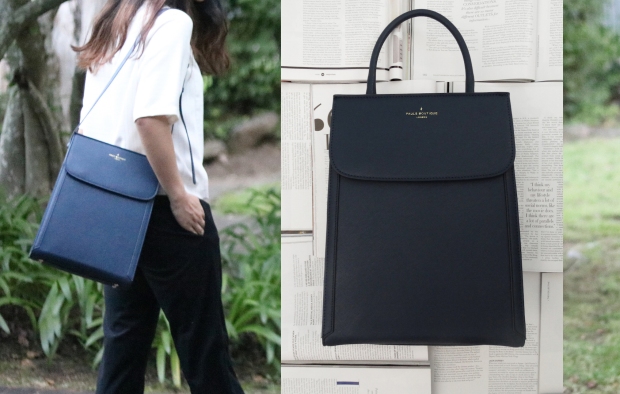